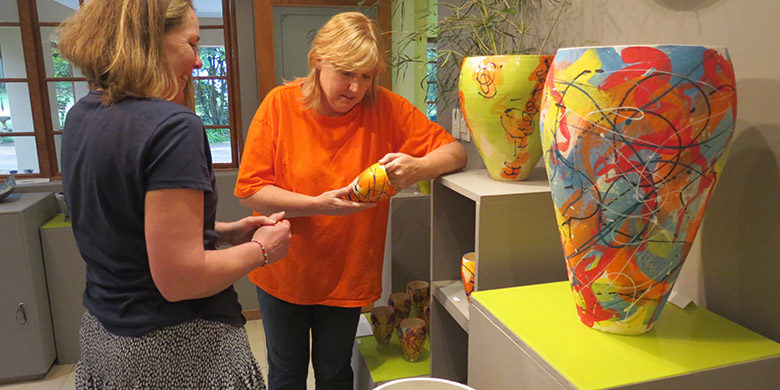 The first time I officially had a work appointment in Johannesburg was 23 years ago when Art of Africa was new and young and so was I. I turned up in shorts – I was strictly on holiday after all – and the charming but pompous dealer was heard to declare in plum tones;

But I needn’t have worried. I could have turned up in a hessian sack for all it mattered to the Gauteng Ceramic Collective (as I have labelled them); so wrapped up are they in clay and unconcerned about appearances. I was approached by a lady called Vivienne Oberholzer, who is not a ceramicist herself but has much experience in marketing ceramics. In her quest to promote SA ceramics abroad, she kept encountering my name in various contexts, so she contacted me directly and invited me to meet a group of Gauteng ceramicists. Given that I normally arrive in an unknown area and, armed with a hired car, cell phone and sat-nav, make my own way perilously down farm tracks, onto exclusive golf estates, and into townships in search of art, I accepted this offer with alacrity.

Not only did Vivienne set up a private exhibition for me of work by the leading ceramicists from Gauteng, but she arranged individual appointments for me with them, on the hour every hour, fuelled by coffee and croissants, plus a delicious lunch of cheese and grapes on assorted hand-made ceramic plates of course. It gave me a chance to discuss their work, their processes and inspiration, and finally to choose first hand precisely the pieces I wanted for this “Summer Selection 2014”. This is what makes our business so personal.

Is there a giant more gentle, or so subtle with his colourations, than the master of translucencies, John Shirley? And could work get more symmetrically perfect or more virulently blue than that of the shy chemical ceramicist Karen van der Riet?Ever since first seeing two bowls by her in Muldersdrift a good decade ago, I have sought the elusive Dale Lambert, and when we finally met, I found her every bit as enchanting as her clean, crisp work. Having previously shown work by Michelle Legg, it was refreshing to meet the straight-talking, no-nonsense, hard-working artist, who is highly qualified and has an arsenal of powerful and original ideas. Alison Sher’s work is as precise and considered as she appeared to be; and her love of the bush is etched in the striking visual pieces produced by the softly-spoken Eunice Botes. Colleen Lehmkuhl, who hosted us at “The Pottery Studio” and is currently Chairperson of Ceramics Southern Africa, Gauteng Region, is experienced, lively and fun-loving – so naturally is her work.And Vivienne, proved to be unflappable, wonderfully organised and invaluable in not only facilitating my visit, but in packing and shipping the work since.

It was a unique and exhilarating day, spent with a diverse group of highly talented, qualified and motivated artists, united in their love of clay, porcelain and bone china, who began as strangers and ended as friends. They later confessed they had expected me to be “caftan-clad and very old” – perhaps I should have worn my shorts!