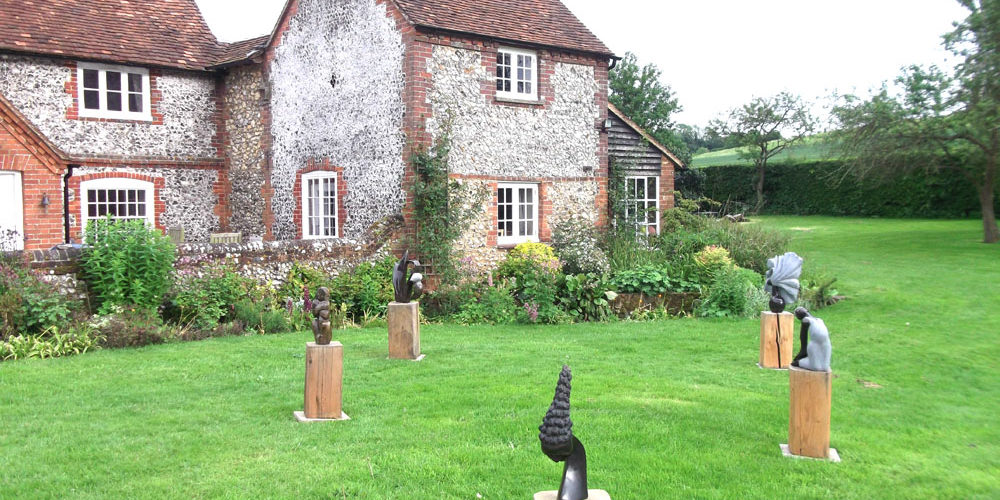 Glorious June weather makes all the difference to outdoor sculptures.  Not only do they look lack-lustre and dull in cloudy, damp weather, but it is no fun for punters huddling on wet grass under dripping brollies, to stroke wet stone.  Even less so to squat and squint to read the biographies,  their posteriors protruding  to the damp precipitation. 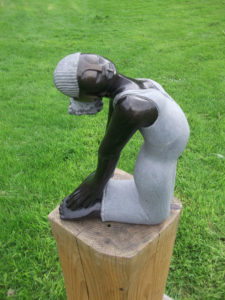 However, when the sun comes out, the stones glint and streaks of colour speak to the viewers in the same way they did to the sculptors who carved them in the African sunshine.  Fruit serpentine, lemon opal, cobalt, even the seemingly dead black of springstone, come to life in natural light.  And visitors to Fillingdon Fine Art can meander freely amongst them; no danger of their heels sinking into a muddy lawn; or sit and admire them from afar, cup of tea in hand.

Much has been written about Zimbabwe’s stone sculpture heritage and Shona sculpture is now widely accepted as the most important art movement to have emerged from Africa in the twentieth century.  In 1957, Frank McEwen was appointed as the first curator of the new National Gallery in Harare. He had previously been curator at the Rodin Museum, Paris and had links with various artists of the time, including Picasso and Matisse.  McEwen encouraged the artists to look inward, to find their ‘tribal sub-consciousness’ and express it through their art.  Over the subsequent sixty years, many first and second generation artists have become world famous, and many more clamour to be internationally recognised.

Princess of the Blue Waters

Set against the Chiltern Hills, there is an appealing and diverse collection on this show, so make sure you see them in this current spell of beautiful weather.